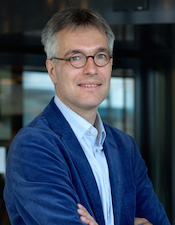 Erwin Peterman is interested in understanding how life works at the fundamental, single-molecule level. With his experiments he strives to provide quantitative insights in life processes that can be rigorously tested using physical models. To this end, he applies a multidisciplinary approach including elements from molecular and cellular biology, biochemistry, statistical physics and optics. The techniques used in his lab are (single-molecule) fluorescence microscopy, fluorescence spectroscopy and optical tweezers.

Current research focuses on the cooperation of motor proteins in intracellular transport in C. elegans cilia, on the mechanics of DNA and DNA-processing proteins, on the dynamics of membrane proteins in living bacteria, and on the development of new instrumentation and approaches to study life at the single-molecule level.

Peterman teaches several courses at the bachelor's and master's level to students in Physics, Medical Natural Sciences, and Biomolecular Sciences, in particular "Microscopy and Spectroscopy" and "Mechanics and Thermodynamics in the Cell". He frequently supervises BSc and MSc research projects.

In 2003 Peterman received a five-year VIDI grant from the Netherlands Organization for Scientific Research (NWO), in 2011 a VICI grant. In 2013, he was appointed as full professor on a University Research Chair. In 2017 he was awarded the NWO Physics Valorization prize (together with Gijs Wuite). In 2018 Peterman received an ERC Advanced grant.